Our Social Citizens: Students Posting Above the Line

Social Media has reshaped the landscape that our students travel across each and every day. For better or worse, their lives straddle online and offline worlds. Relationships and friendships are stretched and pulled in directions that many of us can’t imagine. Too often our collective gut response involves cutting it off or pretending this force doesn’t frame the lives of the students who sit in our classrooms everyday. It consumes them. Like all other school districts, teachers and administrators in the Grossmont Union High School District grapple with the balance between it being a positive force or a distraction. Too often we get stuck in the negativity, but in the last two months there have been two instances where our students have risen to the occasion in the social media realm. 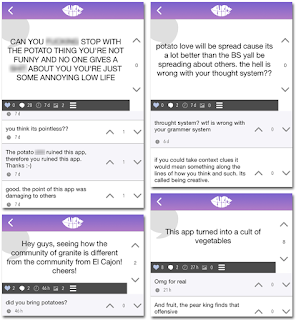 The first involves BurnBook. In early March, this app swept through our schools and caused a significant disruption here and across the country. Students anonymously posted terrible statements about their peers, teachers, and anything else they could attack. While bullying in schools is hardly a new idea, the nature of this app facilitated and encouraged it. Our district quickly reacted and issued a statement to the media and parents informing them of the situation, along with suggestions to deter its use. Luckily, it fizzled out almost as quickly as it started. Despite the negativity that BurnBook brought us, it gave a small group of students at Granite Hills High School the opportunity to stand up and take action. Dismayed by what they saw in the feed associated with their school, these young men decided to flood BurnBook with posts about potatoes, vegetables, and fruit. This was much to the dismay of many contributors who demanded with less-than-kind words that they stop. They didn’t. Within a day or two, the self proclaimed Potato King spammed BurnBook with so much nonsense, that the threat at Granite Hills dissipated. These students did the right thing without prompting, and should be considered heroes. 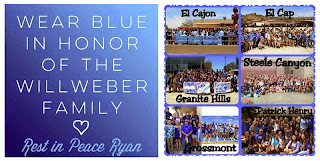 The second event follows the tragic car accident in front of West Hills High School on April 30th, where Junior Ryan Willweber lost his life. News of the accident and then his passing spread rapidly on social media. Within 24 hours, over 2,500 unique posts and over 20,000 retweets with the hashtag #RIPRyan appeared on Twitter and Instagram. The simple addition of #RIPRyan instantly created a community where anyone could view or contribute to the stream of photos, condolences, memories of Ryan, and support for family and friends. On Thursday evening, a message requesting that students across San Diego wear blue in his memory went viral. Friday morning, hundreds of students at over a dozen schools showed support to a grieving family and school. Photos were taken at several schools and shared out on Friday via Twitter. While nothing will take away that pain, people directly and indirectly touched by tragedy had the opportunity to instantly reach out and come together in a way not possible ten years ago.


Social media continues to redefine what happens in and out of school. It presents a new set of challenges on top of the challenges we educators already face. However, we can’t ignore it or shut it off. We must face it and embrace it so we stay relevant in this new world. There are no special online and offline rules. We can use the term “digital citizenship” to quantify this new frontier, but really, it’s just citizenship. This new territory will require us to build resources and guidelines in the coming months, but we can always learn from the ways our students continue to adapt to technology and the times they rise up to surprise us along the way.
Posted by Dan McDowell at 8:09 AM